The first workshop of the EU-funded project “Identities on the move – Documents cross borders – DXB” will take place next Friday, April 30th, from 2 PM to 6 PM, via ZOOM.

The event will be introduced by Prof. Laura Calafa, who will also present the aim of the European project, and hosted by Paul Patreider.

Attendees will be able to follow the event in Italian and German (simultaneous interpretation). 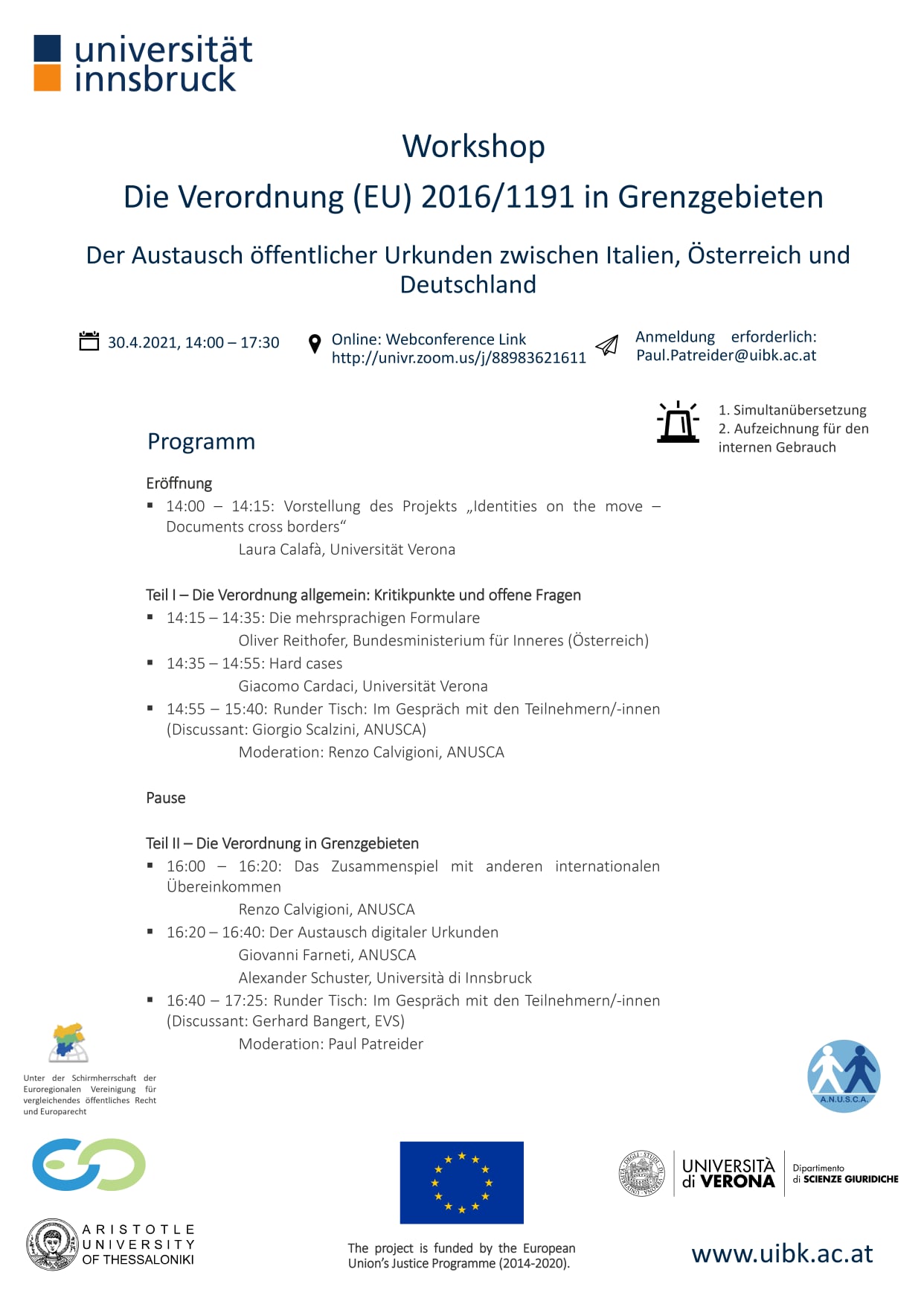 Report of the event

On April 30, 2021, the first public workshop planned as part of the European Project “DXB – Identities on the move – Documents cross border” was successfully held. The Project focuses on Regulation (EU) 2016/1191 of the European Parliament and of the Council, of 6 July 2016, which promotes the free movement of citizens by simplifying the requirements for the presentation of certain documents in the European Union.

The workshop consisted of two sessions: in the first part, the EU Regulation No. 2016/1191 was analyzed in order to bring out the most problematic issues that have been identified so far by scholars and by practitioners who are required to give it concrete implementation; In the second part, a comparison was carried out between different application experiences in cross-border regions and a specific focus was opened on the challenges posed by the digitization of public documents to their circulation.

The workshop was opened by Professor Laura Calafà (University of Verona) who introduced the main goals of the Project. In light of the lacking consideration on the potential of the EU Regulation, not only among scholars but also among the authorities directly involved in its implementation, it is necessary to better understand how the EU Regulation is currently implemented within specific national practices, and to raise awareness among registrars and legal practitioners. Calafà stressed the main strength of the Project: to connect the scientific and applicative dimension of the EU Regulation, carrying out an EU-wide comparative survey placing the Regulation into the context of everyday and national practice (with a focus on the implementation in the Brenner cross-border region).

The first session of the workshop, moderated by Renzo Calvigioni (A.N.U.S.C.A., Italy’s National Association of Registrars), started with the contribution of Oliver Reithofer (Bundesministerium für Inneres, Austria). Reithofer dealt with the subject of multilingual forms provided by the new Regulation (EU) 2016/1191, which serve to support the translation of public documents and facilitate the registrars’ work of registering or transcribing them. A first critical aspect that is highlighted, starting from the Austrian experience, concerns the increase of bureaucratic burdens on local administrations for the correct use of multilingual forms, to which a glossary in 24 languages is linked. This could be minimized by the installation and automatic filling from the central register. With regard to the authorities issuing documents on these multilingual forms, it is reported that a great deal of training has been carried out at both national and regional level to provide them with adequate support to implement the EU Regulation, and indeed no problems have been encountered with regard to the issuing of documents in Austria. However, it was pointed out that the number of form translations that have been issued by the Austrian authorities is generally very low, especially when compared to documents issued under the ICCS Conventions. He highlighted that standard forms are nevertheless being requested by persons belonging to national minorities (e.g. Slovene minority in Carinthia).

On the other hand, with regard to the receipt of foreign documents and their translations, misunderstandings were reported arising from the multilingual form itself. However, the problem has tended to be solved today thanks to the intervention of the Austrian central authority, which has clarified that documents drawn up using these multilingual forms basically must be accepted.

Another critical point highlighted with regard to the exchange of documents at European level is the great lack of homogeneity in national regulations which sometimes makes the circulation of information more difficult.

Finally, with regard to future developments, mention was made of the ad hoc committee monitoring the EU Regulation and the importance of encouraging dynamic forms to be uploaded onto an e- justice platform from which documents can be printed and filled in by the competent authorities, and which in the future could be directly editable online.

The second speaker of the first session, Giacomo Cardaci (University of Verona), addressed some “hard cases” that might arise from the specific application of the Regulation no. 2016/1191. These are statistically minority cases, the resolution of which is complex, which often concern certain sexual minorities and which presuppose a different legislation between the legal systems considered. The reflection is therefore particularly important for the purposes of the Project itself and is preparatory to the identification of new and further “hard cases” to “test” the very strength of the EU Regulation. Whereas:

a number of “hard cases” were then exemplified, subdivided into themed areas (couples; parenting; gender assignment and modification; name assignment and modification) and also included in a questionnaire that will be submitted to the national experts. For instance, with regard to marriage certificates, a problem is highlighted that the Regulation poses with regard to Annex No. 7 concerning registered partnerships: in fact, registered partnerships constitute a great variety (each State has various names and various types of partnerships). Cardaci raised the following questions: which of these registered partnerships fall within the scope of the EU Regulation since not all States have provided the EU Commission with the relevant forms; when can the standard multilingual form be applied for this kind of partnership since such forms can only be used by the national authority when it considers that the information in the form is sufficient to process the public document.

Another “hard case” dealt with was that of marriages celebrated before a foreign minister of religion. In this hypothesis, the question may arise as to whether or not these marriage certificates fall within the scope of the Regulation (as the Regulation does not apply to documents issued by a third-party State, and it must therefore be understood whether or not this marriage certificate is a certificate issued by an authority of a third-party State).
Another interesting example of a “hard case” analysed during the workshop was that of filiation and parenting. There is no standard multilingual form in the field of filiation but the EU Regulation applies to these documents as well. This raises some problems:

Finally, another example mentioned was that relating to intersex people and the indication of an “undetermined sex” that all the forms of the EU Regulation assume can be indicated. Also in this case critical issues could arise in regard to the circulation of public documents, given that some States recognize the possibility of indicating a third sex (however that term is defined) in the documents, while other States that do not recognise such option.

At the end of the first session of the workshop, a round table discussion followed where reflections emerged from the contributions of the speakers.

The second session of the workshop was moderated by Paul Patreider (University of Innsbruck) who introduced the topic and gave the floor to Renzo Calvigioni (A.N.U.S.C.A. (National Association of Registrars)), who highlighted a number of critical issues arising from the application of the Regulation (EU) 1191/2016 in comparison to the ICCS Conventions and other relevant international conventions. The Regulation is certainly innovative because a citizen moving to another country can present documents and certificates without the need for legalisation and apostille and without the need for formal translations. The new EU Regulation does not replace the other instruments for exempting documents from legalisation on the basis of other international conventions (e.g., Convention on the issue of multilingual extracts from civil status records (Vienna, 1976); Convention on the issue of certificate of legal capacity to marry (Munich, 1980); The Hague Convention Abolishing the Requirement of Legalisation for Foreign Public Documents (1961)). Their comparison is therefore interesting.

Among the critical issues identified were:

The next speaker was Giovanni Farneti (A.N.U.S.C.A. (National Association of Registrars)) who illustrated a best practice implemented through another European project aimed at creating a digital system to simplify the circulation of documents. The “European Civil Registry Network – ECNR” (2008-2011) was a specific experiment that involved municipalities and registrars putting into practice the exchange of multilingual documents through a web interface, which operators accessed by authenticating them with their national systems, and filled in multilingual document request forms or provided them to other administrations (https://www.youtube.com/watch?v=7hysL_pjgvQ).

Alexander Schuster (University of Innsbruck) then spoke about the digitalisation of public documents and their circulation in the European area. More specifically, the digital dimension was analysed in the context of Regulation (EU) 2016/1191 as it mentions digital signatures and electronic identification of persons and this differs from other conventions that did not foresee the digital dimension (but only the paper dimension) from the outset.
More specifically, since the Regulation (pursuant to Article 17) does not affect the EU legislation on digital signatures and electronic identification (Regulation (EU) 910/2014 (electronic IDentification Authentication and Signature – eIDAS), some problematic issues arise with reference to the application of the Regulation that may concern:

The important point Schuster made was that since the public document is governed entirely by national rules, if the State decides that that document is validly formed under its national rules then it necessarily also falls under the application of the EU Regulation. So, ultimately, it is the State that decides the conditions of formal validity of its public documents. Therefore, it is necessary to understand what characteristics the document must have to consider it valid and then try to understand how some specific formal features impact on its circulation. Since the Regulation intervenes to eliminate the legalisation (or apostille) step and requires Member States not to refuse a document on the grounds that it is not legalised or does not have an apostille, the national digital dimensions a document can take opens up an interesting field of investigation in the context of the “Identities on the Move” project. Refusal to acknowledge a document valid under the law of a Member State could lead to the failure to comply with the EU Regulation, which exposes States to infringement proceedings or intervention by the Court of Justice.

The last contribution was by Gerhard Bangert (EVS), who reported on the German experience with the application of Regulation (EU) 2016/1191. As in the Austrian and Italian cases, there has also been very little experience of practical application in Germany. Multilingual forms have mostly been used in border areas and with respect to Eastern European countries. Bangert also reported some critical issues including:

The workshop concluded with a second round-table discussion in which the issues raised in the second session were discussed and some of the critical issues already raised during the workshop were reiterated. In particular: